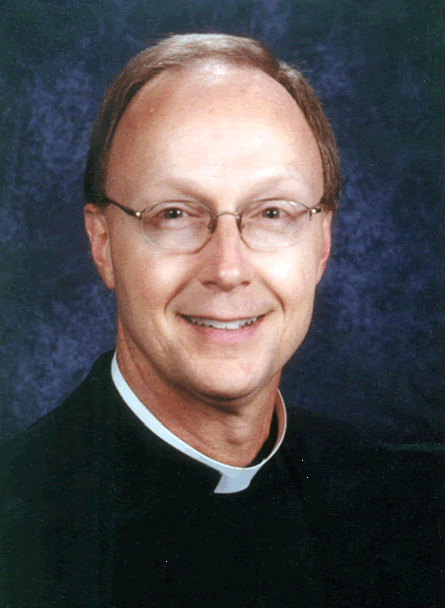 Fr. Rick Stansberry grew up in Oklahoma City and attended Casady School.  At the age of 16 he converted to the Catholic faith and became a member of Christ the King Parish. After high school he attended Southern Methodist University and graduated in 1983 with a degree in Accounting. In 1984 he graduated from Oklahoma City University with a Master's Degree in Accounting.  He worked as an accountant for three years prior to entering St.Meinrad Seminary in Indiana. He graduated from Seminary in 1992 with a Masters Degree in Divinity and a Masters Degree in Religious Studies. He was ordained to the priesthood in 1992 and his first assignment was at St. Charles Borromeo in Oklahoma City. After 5 years he was sent to Rome to attend the Pontifical University of St. Thomas where he obtained a J.C.L. Degree in Canon Law.  From 2000 to 2002 he was pastor of St. Peter and Paul Parish in Kingfisher and from 2002 until 2007 he was pastor of St. Francis of Assisi parish in Oklahoma City. He came to Christ the King in June of 2007 and at the same time was named Judicial Vicar for the Archdiocese of Oklahoma City.  Prior to that he was assistant Vocations Director.

Get real time school updates on your mobile device with eChalk Notify.

Connect with code YUN4LW to get instant alerts or log in with your eChalk user account for the latest updates from all your classes and groups.